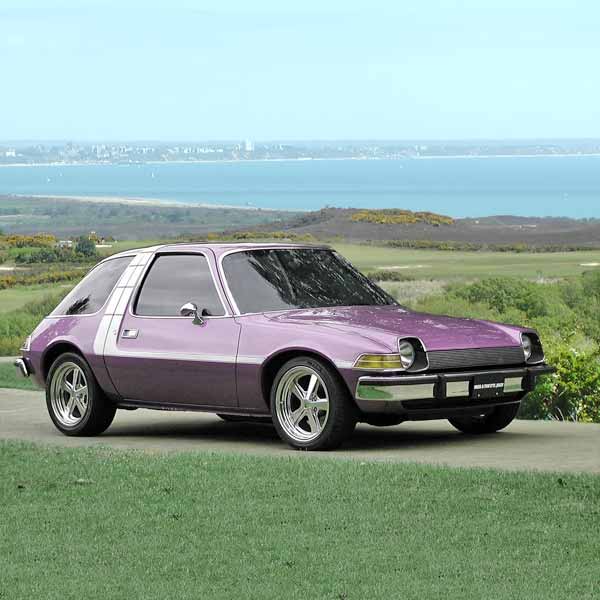 Who dremed up the AMC Pacer?

The AMC Pacer should never have been made. In the middle of the 1970s there was a fuel crisis as the price of petrol shot up worldwide and long queues at filling stations became routine. Cheap, small and economical Japanese cars were flooding the markets in the United States and Britain so the home grown car manufacturers were looking around frantically for a car they could create which could actually compete against this tide of imports.

The American Motors Corporation came up with a masterpiece; the Pacer, a car which failed to match a single one of the qualities that made the Japanese cars so attractive to buyers.

Billed as the first 'wide small car' it was hardly small at all, being in fact longer than a Ford Granada! Wide it certainly was, even wider than a Rolls-Royce Silver Shadow. It was tall as well, with a huge amount of headroom for the drivers and passengers. What this did for the appearance of the car, as well as its aerodynamic efficiency, can be easily imagined. And all this had to be paid for; this was not a cheap car by any standards.

Attractive? A huge 37 percent of the total surface area of the car was glass. Whilst this improved visibility it made the car look like a big goldfish bowl on wheels. Drivers and passengers alike were roasted on sunny days. It also added to the weight of the car which hardly improved fuel efficiency.

Economical? Hardly. The smallest engine that you could buy for it was a huge 3.8 litre six cylinder beast that drank petrol.

Fun to drive? Okay it would do 104 mph but the prominent UK Motor Magazine absolutely slated it. This was hardly surprising; a spokesman from the manufacturers had already stated that they were building a car that a lot of people wouldn't like! Hardly the best marketing approach.

This was a three door car; the passenger door was longer than the driver's. It was meant this way so that passengers, particularly those getting into the rear seats, could have more room to do so. Unfortunately this was designed for a left-hand drive car. When the car was converted to right-hand drive for the UK market this meant that the driver instead had a big door to get in and out of, but the passengers had to put up with the smaller one!

Designed as an economy car the Pacer ended up as nothing of the sort. It must've had Japanese car manufacturers laughing themselves silly. It was a product of an American mindset that dictated that every car had to be huge with a big engine, at a time when the rest of the world was switching to smaller and more economical ones.

Eventually a total of 280,000 of these ugly cars were produced, at a time when Japanese manufacturers were counting their sales in millions.